Did you know that there are a number of Degrassi-related books available? Degrassi may be a television series, but if you want to step away from a screen and read about Degrassi you can do this too. Here is a list of my favourite Degrassi books and how you can find them in 2021. 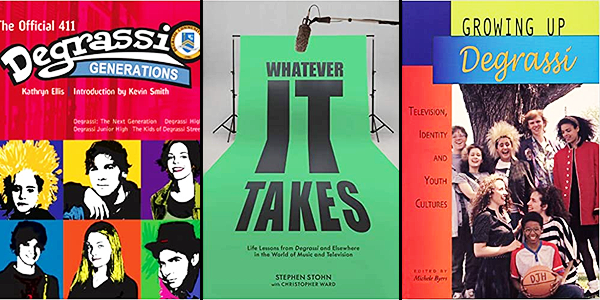 During the original Degrassi era, Degrassi was publishing a number of novels based on the characters and storylines in the Kids of Degrassi St and Degrassi Junior High. Each book centered around a different Degrassi character and told a story from that character’s point of view. Many of these books were written by the writers of the Degrassi TV series. These books are fun companion pieces to the series. They haven’t been in print for a very long time, but if you are a Degrassi collector you can often find vintage copies on sites like eBay.

Released at the height of TNG’s popularity in 2005, Degrassi Generations is an illustrated fan book all about the history of Degrassi. This book takes you behind the scenes with photos and detailed biographies of all the characters, episode synopsis’s, and descriptions of the sets, music on the show, and the issues that Degrassi took on throughout the years. If you’re a Degrassi fan, this book is a must have for your collection. Degrassi Generations is not in print, but you can often find copies on Amazon.

Growing Up Degrassi by Michele Byers

Growing Up Degrassi is a book of essays written by various Degrassi fans and scholars. It discusses Degrassi from a more academic point of view. The topics of these essays range from online fan communities, comparing Degrassi to other teen shows, and how Degrassi changed from Degrassi Junior High to TNG. This book is not technically officially associated with Degrassi, but Linda Schuyler did write the Afterword so in that sense has given her blessing. If you’re someone who is interested in reading about Degrassi from a more historical or critical point of view, Growing Up Degrassi is for you. You can find used copies on Amazon.

In 2006 Degrassi released 4 graphic novels based on characters from Degrassi: The Next Generation. Each graphic novel was formatted similar to an episode of Degrassi, in that there would be an A plot and a B plot centering around different characters in the Degrassi universe. These were meant to compliment Degrassi: The Next Generation and expand on stories in the television series. These graphic novels are fun to own, and if you like manga in particular it’s cool to be able to see Degrassi play out in that medium.

Whatever It Takes: Life Lessons from Degrassi and Elsewhere in the World of Music and Television by Stephen Stohn

Whatever It Takes is a memoir focusing on the life of Degrassi executive producer Stephen Stohn. It takes you through Stohn’s career, starting with his early days as an entertainment lawyer and later his time producing Degrassi. This book is inspirational in that you get to see how Stohn got to where he is today through perseverance and passion. It’s also full of tidbits about Degrassi, including the time when Degrassi was secretly cancelled after Season 9 (which was not made public until this book was released). Whatever It Takes was released in 2018, so unlike the other books on this list it is still fairly easy to find at any major book retailer.