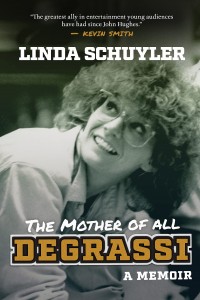 In the opening chapter of Linda Schuyler’s book The Mother of All Degrassi, she recalls how she was bullied as a child for being a British immigrant to Canada. She says she was told to “go back to where you came from,” and taunted with the phrase “Hey Brit girl. Yes, you, shit girl” by kids at school.

Given the fact that Degrassi has long been known for standing up against bullying and celebrating all forms of diversity, it is a poignant introduction to the woman who created the franchise we all know and love. Linda is quite literally the “mother” of Degrassi, and her new memoir peels back the curtain on some of her personal experiences that shaped this 40+ year old franchise.

I was fortunate enough to receive an advanced copy, and I can say with confidence that this book is a must-read for Degrassi fans, particularly those who are interested its decades-long history. Unlike Stephen Stohn’s memoir Whatever It Takes (which focused on his career as an entertainment lawyer beyond just Degrassi), Linda’s book is almost exclusively about Degrassi. She calls Degrassi her “life’s work and passion,” and that passion is evident on every page.

Throughout the book, Linda provides greater insight in several aspects of the Degrassi story that up until this point she has not discussed openly. One example of this is her troubled relationship with Degrassi Co-Creator Kit Hood. Long-time Degrassi fans will probably already know that Linda and Kit were in a romantic relationship while they were working on The Kids of Degrassi Street, Degrassi Junior High, and Degrassi High together. But in this book, Linda explores some of the more personal challenges that she and Kit experienced in their relationship. She says that he had frequent mood swings and outbursts of anger. It is clear that this was a very unhealthy relationship.
(Kit passed away in January 2020, so unfortunately we will never get his side of this story).

Another part of the book that I found particularly heartbreaking was the section about Neil Hope. Linda discusses her decades-long friendship with Neil from the first time she met him (when he was cast as Griff in The Kids of Degrassi Street) to the last time she saw him (when he guest starred on Degrassi: The Next Generation in 2003). She also talks about how she was “gut-wrenched” when she found out about his death in February 2012. It’s clear she still carries a lot of guilt for not being able to prevent this tragedy from happening to one of Degrassi’s biggest stars.

But it’s not all tragedy and loss. The Mother of all Degrassi is filled with stories of love and relationships, business success, social progress, and celebrity. From her friendship with Bruce Mackey (whom she has dedicated the book to) and the early gay rights movement in Toronto, to the first time she met Stephen Stohn and their decades-long romance, to rubbing shoulders with Hollywood elite and attending (and often winning) many different awards, Linda has so many fascinating stories to tell.

What is clear to me after reading this memoir is that Linda is a strong leader who has had to make a lot of difficult decisions. Degrassi would not be what it is today without someone as tough and as passionate as her leading it for multiple decades. After being plagued by bullies and sexism throughout her life, she was able to rise above and create a franchise that would change kids’ lives all around the world. A true Canadian immigrant success story ♥

The Mother of All Degrassi is currently available for pre-order and will be released on November 15, 2022. Linda’s proceeds from the book are going to Kids Help Phone.