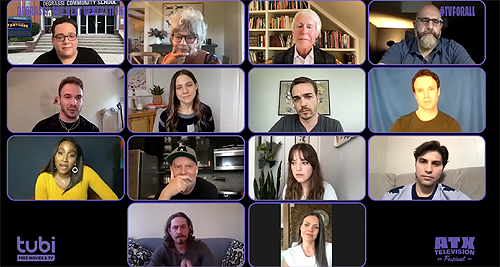 On how rebooting Degrassi for “The Next Generation” came about:
Linda reminded everyone right at the start of the panel that this is her 41st year working on Degrassi. She said that when Degrassi High ended, Yan Moore, Kit Hood and Linda herself figured that they were done with high school shows. Then overtime, they started to miss telling stories about teenagers. She described how the Degrassi Junior High reunion on the CBC show Jonovision got huge ratings and created a lot of excitement around Degrassi. At the time, CBC was also airing Degrassi Junior High reruns and a new generation of fans were finding Degrassi for the first time. When Linda and Yan decided they wanted to develop another teenage show, it was Yan who realised how old Spike’s baby would be in the early 2000s. He proposed that they reboot Degrassi instead of making a new teen drama. They also met writer Aaron Martin fresh out of film school. Aaron had been a fan of the original Degrassi, and then went on to be an Executive Producer for Degrassi: The Next Generation. Stephen also pointed out (quite correctly) that when Degrassi first came back as The Next Generation, the reaction from fans wasn’t very good. A lot of fans thought it was “too glossy” compared to Degrassi Junior High. However, after about a year, that started to change and eventually the series really took off.

On the infamous abortion episode “Accidents Will Happen:”
Aaron pointed out that there was not much push back from Canadians on that episode. In Canada, it wasn’t an issue and no one seemed to care. In the US, Stephen said that The N knew what was happening with that episode and they saw the script in advance, but then they just didn’t air it. Linda also chimed in to note that in 2004 when that episode was scheduled to air, abortion was coming back to the forefront as a hot button topic in the US. She recalled a huge protest in Washington with a lot of pro-life supporters, and she thinks this may have contributed to The N getting nervous and not airing the episode initially. Regarding Degrassi’s other abortion episodes such as “#IRegretNothing” in Degrassi: Next Class, Stefan said that even then with Netflix they had to take the American side into consideration. Ultimately Lola’s scene in the procedure room would have never happened if the storylines with Manny and the twins (in Degrassi High) didn’t come before.

On the Mall Tours and Fan Events:
Jake shared a memory of a fan event he attended with Aubrey (Drake) at Madison Square Garden. He explained that because there was such a large number of fans who showed up, they split Aubrey and Jake on opposite sides of the room and the fans had to choose who they wanted to get an autograph from. He jokingly said it’s too bad for all the people who didn’t pick Aubrey, because he is so famous as Drake now.
Andrea also recalled how scared she felt at these events, because there were so many people and so much screaming. She said that she and Lauren would hold each others hands to get through it.

On Eli and Clare’s relationship:
Aislinn spoke about how the biggest impact Degrassi had for her was working with people her own age, because on every other show she had been on she was always surrounded by adults. In terms of the most memorable Eclare scenes, Munro noted the bench scene and also the scene at school when Eli is trying to get Clare to come out of her shell. He said that this was when they realised the chemistry was real, and he remembers the fans really loved these scenes in particular. For Aislinn, she said that the fan reaction to Elie and Claire was “shocking,” “exciting,” and “validating.” Even though she really enjoyed working with Munro right from the start, the excitement amongst the fans was something they never expected.

On portraying series issues at a very young age:
Christina talked about Terri’s abusive relationship storyline in TNG S3. She said that at the time, she wasn’t even aware about the topic of abusive relationships. To this day, she stills gets messages from fans about how impactful Terri was and how the storyline helped them through their own situation.
Jake also shared a memory about Craig’s bipolar storyline. He said that Linda had to explain bipolar disorder to him, because he didn’t know very much about it. They even brought in an expert for Jake to talk to to help him prepare. He recalled feeling excited to portray something that people were actually going through.

On Adam Torres:
Munro had some really kind things to say about Adam and his journey on Degrassi. He revealed that he now has a family member who is transgender. Before Degrassi, he didn’t know anything about the trans experience. “Degrassi educated me,” he said. Aislinn and Luke also noted how impressed they were with Jordan Todosey who played Adam. They said that Jordan was so dedicated to making Adam a full person.

On the Craig and Marco friendship:
The panel was asked about the Craig and Marco kiss and if “bisexual Craig” was ever a real possibility. Unfortunately Aaron confirmed that Craig wasn’t attracted to Marco. But he did say that they had a very special friendship. Craig supported Marco and the friendship showed how a straight boy can be friends with a gay boy in high school. Jake spoke about how meaningful that friendship was to him. He said that it was so positive, and that his scenes with Adamo “are some of my favourite scenes.”

On the impact Degrassi has had on its fans:
Because Aislinn was part of the Degrassi social media explosion in 2010, she was able to speak to how interesting it was to see the fan’s reaction on Twitter and have direct contact with them.
Daniel pointed out that because Degrassi is an ensemble with so many different types of characters, “every single person [who watched Degrassi] found something in one of us to relate to.”
Shane also talked about how Degrassi means so much to people of all different ages. He said that he’s very active on Cameo, and now he’s seeing children buying gifts for their parents who are fans of Degrassi. But also parents buying gift for younger kids who are now just getting into the show.
All of the cast members acknowledged the huge responsibility that Degrassi has, because it is a show for teenagers. Aislinn even spoke about how she was very critical of 13 Reasons Why because she felt like it didn’t care for its audience like Degrassi did.

On Degrassi’s longevity:
One of my favourite things about Degrassi is its history and how it has always remained true to the core values that Linda, Kit and Yan created back in the 1980s. In this panel, Linda acknowledged that. She talked about how a lot of the core concepts for Degrassi have never changed. But what has kept Degrassi going for so many years is that they have always been mindful of the times. Linda gave an example of the topic of abortion and how it’s changed from the protesters in Degrassi High to Lola in the procedure room in Degrassi: Next Class. When stories are redone, the consequences can be different depending on the time. But the importance of being respectful towards young people has been the same throughout. Stefan also gave the example of Manny flashing Peter’s camera in TNG Season 5. In that storyline, he explained how she was shamed for that at school. When they did similar storylines 10 years later with a generation that has grown up with social media, they had to approach it differently because these situations are now much more common.

On the possibility of another Degrassi reboot:
Throughout the panel, there were multiple mentions of a possible reboot. Stephen said he believed there “should” be a reboot one day. He also said he wants Sean to be in the reboot and get Emma back. Daniel also loved the idea of bringing back the Sean/Emma/Spinner love triangle in a reboot. Regarding whether he would want to be part of reboot he responded “I’d consider it”
Christina said that if a reboot were to happen, she’d want to have a scene with Ali Mukadam (who played “ice cream boy” in TNG S2). Christina is a model in real life, and she said she wants to be able to say to him “listen ice cream boy I’m still doing it [modelling]!” in reference to that iconic scene.
Lauren has a son now, and she said “I hope [Degrassi] gets another reboot for [my son] to watch.” She said she feels like a lot of teen shows nowadays are very aggressive, so she wants her son to have something like Degrassi instead.
Lastly, with the final word on whether Degrassi will get a reboot — “who knows?” said Linda herself.